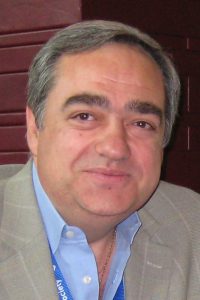 Prof. Spiros H. Anastasiadis (http://www.iesl.forth.gr/people/person.aspx?id=102) will be the Project Coordinator.  Prof. Anastasiadis is Professor of Polymer Science and Engineering at the Department of Chemistry of the University of Crete and the Director of the Institute of Electronic Structure & Laser of the Foundation for Research and Technology – Hellas.

He received his PhD in Chemical Engineering from Princeton University in 1988 working on Interfacial Tension of Immiscible Polymer Blends. He has been a Visiting Scientist at the IBM Almaden Research Center in 1988-1989.  He was awarded the John H. Dillon Medal of the American Physical Society in 1998 (Citation: “For pioneering studies of the structure and dynamics of polymer solutions, melts, interfaces, and thin films”) and was elected Fellow of the American Physical Society in 2000 (Citation: “For important contributions to the dynamics of block copolymers in the melt and in solution and on the structure and dynamics of polymer interfaces and thin films”).  He has received the Materials Research Society Graduate Student Award in 1987 and the Society of Plastics Engineers – Plastics Analysis Division Best Paper Award during ANTEC 1985.  He has been an Editor of the Journal of Polymer Science: Part B: Polymer Physics 5/2006-7/2010 (Senior Editor and Editor for Europe, Middle East and Africa).  He is appointed as a Consulting Editor for AIChE Journal (8/2012-) and a Member of the Editorial Advisory Board of Macromolecules (1/2015-).

H. Anastasiadis was the Founder, Organizer and Alternate Scientific Coordinator of the Department of Materials Science and Technology of the University of Crete (1999-2004) whereas he has been a Professor of Materials at the Department of Physics of the University of Crete (1993–2005) and a Professor of Materials Science and Engineering at the Department of Chemical Engineering of the Aristotle University of Thessaloniki (2005–2008). He has been the Alternate Chairman of the Department of Chemical Engineering (09/2007–10/2008), a Member of the Scientific Council of the Institute of Electronic Structure and Laser of the Foundation for Research and Technology – Hellas (01/2009–05/2013), a Member of the Quality Assurance Committee (01/2009–now) and a Vice Chair of the Technical Council of the University of Crete (02/2011–now). He has been the National Representative and a Member of the Executive Group of the Materials, Physics & Nanociences Domain Committee of the European Cooperation in Science & Technology (COST) and the National Delegate in the Horizon 2020 Programme Committee Configuration on Research Infrastructures.

His research interests are in the areas of polymer surfaces/interfaces and thin films, block copolymers, polymer blends and homopolymer/copolymer blends, dynamics and diffusion in multi-constituents, organic/inorganic nanohybrid materials and responsive polymer systems.  He has published 118 papers in refereed journals, 4 in books, 6 in refereed conference proceedings, and 79 in non-refereed conference proceedings.  His work has been presented 470 times (85 invited plus 19 co-workers invited) in international meetings.  He has given 55 invited lectures at academic and industrial institutions. As of April 6, 2016, he has received (ISI) 4900 total citations (4487 non-self citations).  His h-index is 37.  He has edited 1 book and has translated 2 textbooks in Greek (one alone and one with co-workers).  He has edited 1 special issue of a scientific journal.

He has coordinated several major projects funded by National and International agencies like a NATO Science for Stability Programme (GR-POLYBLEND), an EC/Israel Scientific and Technological Cooperation (CI1*-CT93-0351), a GSRT Operational Programme for Research & Technology (97 EKBAN2-129), two NATO Science for Peace Programmes (SfP–974173, SfP – 981438), two Programmes for Improvement of Human Potential (PENED 99ED23, PENED 03ED581), a European Office of Aerospace Research and Development (Nanocomposite Random Lasers).  Most recently, he is the Scientific Director of the project “Development of an Entrepreneurial and Technological Information Network” funded by the Hellenic Federation of Enterprises (SEV) and the coordinator of the “Aristeia II” Action on “Smart Multi-functional Polymer Surfaces”.