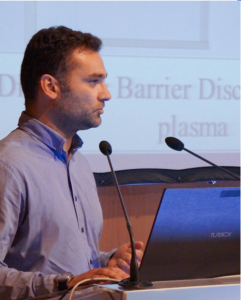 Dr. Christos Aggelopoulos is a Research Associate at FORTH/ICE-HT. He is a physicist by training with an MSc Diploma in Physics (Environmental Sciences) from the University of Patras (2004), and his PhD Diploma on transport properties in soils from the same University (2007). He was Post-Doctoral Fellow and Research Associate at FORTH/ICE-HT (2008, 2010-2012), Institut Francais du Petrole-IFP, France (2009-2010), Université Pierre et Marie Curie – Ecole Nationale Supérieure de Chimie de Paris, France (2012-2014). His research activities are focused on (i) multiphase flow and transport phenomena in porous media with application to liquid pollutants spreading in subsurface, (ii) remediation of polluted soil/groundwater/wastewater by advanced oxidation processes (AOPs), and (iii) carbon dioxide storage in depleted oil/gas reservoirs and deep saline aquifers. He has participated in 12 R&D projects funded by the EU and the General Secretariat for Research and Technology. He was the Principal Investigator (PI) of the research project SOIL-PLASMA, which was among the eight cited as most-promising projects in the 2013 ESPA report. He has been awarded the 2nd Prize in the category “Applied Research” of the 3rd “Greece Innovates!” Applied Research & Innovation Competition, a joint initiative of Eurobank and SEV (Hellenic Federation of Enterprises). He has published 28 articles (8 as corresponding author, 1 monograph) in refereed Scientific Journals, 1 Patent and about 50 papers in international and national conference proceedings.